I just read an article with a woman who turned 40 this year and has finally "accepted" that she is no longer young and has had to give up her youthful dreams, like going to acting school or becoming an über-tycoon. There are several questions here, not least of which are

1) Why did I waste time I will never get back reading such banality? and

2) WTF? If we all assign ourselves to the scrap heap or give up on dreams because of being a certain age then we are just conforming to the idiot dichotomy of modern life. Youth is the be all and end all and yet we have an increasingly "older" population?

Youth is precious simply because it is fleeting. So while it's nice and we should perhaps try to appreciate our time in the land of tight jeans and wild hair (not so much the tight jeans for me, I weighed about 19 stone for most of my twenties, but I did often have mad hair) shouldn't we bloody well value the fact that our shit gets wiser or, at the very least, we've failed often enough to start working that shizzle into a golem of self-advantage rather than self-sabotage at last?

I intend to be not young for a long fucking time. Maybe I'm lucky - Mr Y calls me the baby-faced assassin - and it's true, I don't particularly have wrinkles and people regularly think I'm about ten years younger than my not-at-fucking-all decrepit 39 years. But face is not fact. I am 39 and I will be 40 in about 9 and a half months. So according to that fool woman, it's time I accepted I'm not young and that I should give up childish dreams. Well, I say, fuck that shit. Fuck it right up the arse and out the ear. Realising that you're not as young as you were is like saying "hey man, this water is like totally wet" REDUNDANT. Age is meaningless. People die all the time at all kinds of ages, many of them far too young (quite a few far older than they deserved, naming no names). Rather than bemoaning our loss of years, we should be shouting "FUCK YEAH! I'm still here and I'm kicking that time shit in the BALLS!". The last things you are going to prise out of my cold dead hands are my dreams, youthful or otherwise. That's right. I'm going to rule the world, I'm going to write a best-selling library of books and  Benedict Cumberbatch is going to rub his balls all over his Oscar for starring in my movies. Or something. I'm going to outdo Bassey, I'm going to win gold medals. I'm going to do it all. Or I won't, whatever. But I'm always going to dream I can.


I just read a fucking good book.  Then I read a couple of the reviews of it on GoodReads and thought "wtf?!" So I'll repeat what I said there and tell you what I thought.

Sweet Hell on Fire is honest and inspiring - rare traits in this increasingly disingenuous age. Talking about "narrative arcs" and "storytelling voice" in relation to a memoir like this is redundant, not to mention somehow snarkily oblivious, if you will. This is life lived (almost) one day at a time. You don't get arcs in life, you just get life.

Lunsford's account of her year is brutal and you get a no holds barred sense of a quest for self - or, more appropriately, the regaining of self - whether she thought she wanted it or not. It's quite something to sit down and open yourself up like that. There might well be some self-justification in there, but you'd have to be an insensate ass not to see that this is far outweighed by the honesty with which she deals with herself and her actions during her descent and ascent - she's human for goodness' sake!

I read it in two sittings. It showed me things about myself that I need to deal with, that I've been shilly-shallying about with for far too long. I need to dispense with my apathy and kick myself back into the game. Lunsford showed me how to own it. I'm not going to let either her or myself down.

I read Alec McQuay's novella in one happy sitting. Mental. I loved it! It's a grim vision of what we could become peppered with humour that kind of makes you want to be there (in that way where you're comfortably aware of being on your sofa with a lovely cup of tea and the bathroom within easy reach) The characters are bizarrely well drawn (you read it, you'll see how appropriate that wording is) and the pace is electric. Another knockout brought to you by FoxSpirit and the only complaint I have, Mr McQuay, is that I want MORE! Ta.

And if you haven't checked out FoxSpirit Books yet, then here's a link for your to peruse at your leisure
http://www.foxspirit.co.uk
Posted by Chloe Yates at 11:10 No comments: 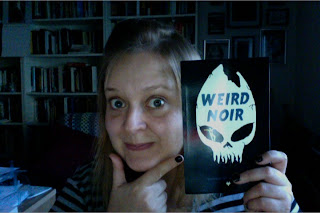 Hurray! I'm in real live paper print! That's me holding the first printed book with my words in it! As though being included in the Fox Spirit anthology in the first place wasn't enough, it's gone from ebook to print. Avail yourself of a copy at Amazon toot sweets! Mine's the first story in there (and there's so many more to take a lovely weird bath in). You won't be sorry ... well, you might be, but only in a deliciously odd way.
Posted by Chloe Yates at 13:37 No comments:

I Stride Across Mountains

Something a little different from my usual fare, but my mind has been in need of a kick up the proverbial, so I did something healthy and focussed it into a poem. Get me!


I stride across mountains,
Take deserts by storm.
I sail through the heavens,
Strike camp on the moon.
I battle fierce ogres,
Fight demons of rage,
I tangle with shadows,
And strangle your shame.
For I am not timid,
Not tiny or small,
Nor will I be silent
Or frightened to fall.
I defy my adversaries,
My power is all –
I will not be transmuted
Into consumable form.
I am the wide ocean,
The sun and the rain,
I am forever and
Will never be tamed.